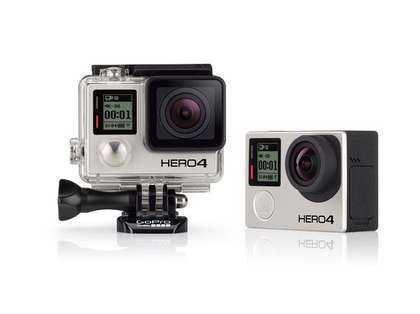 
Free Economy Shipping on Orders over $200 with Code: TD200 (Some Exclusions Apply)

Places to Go Fishing
The GoPro Hero4 Black Edition Camera is the most advanced GoPro ever. This camera features improved image quality and a 2x more powerful processor with 2x faster video frame rates. This camera features incredible high resolution 4K30 and 2.7K50 video and high frame rate 1080p120 video that enables stunning and immersive footage of you and your world. Protune settings for both photos and video unlock manual control of Color, ISO limit, exposure, and more. Waterproof to 131'(40m) with 12MP photos at 30 frames per second and improved audio. The GoPro Hero4 Black edition camera is the ultimate life-capture solution.

Powerful photo capture
With 12MP Burst photos at a blistering 30 frames per second, HERO4 Black helps you capture the moments you don’t want to miss. Capture single photos, or choose Time Lapse mode to shoot photos automatically at set time intervals from 0.5 to 60 seconds—great for gear-mounted shots when the shutter button is out of reach.
With the HERO3+ Black Edition GoPro introduces SuperView, a video mode that captures the world's most immersive wide angle perspective. It allows you to capture more of yourself and your surroundings in the shot—resulting in captivating, ultra engaging footage.

Settings for after dark
Capture the night sky in a whole new way. New Night Photo and Night Lapse modes offer customizable exposure settings of up to 30 seconds for single and Time Lapse photos. Whether you’re shooting the Milky Way or a campfire hangout, Night Photo and Night Lapse allow you to you capture ultra low-light scenes like never before.

Control, view and share with built-in Wi-Fi + Bluetooth
HERO4 Black features built-in Wi-Fi and Bluetooth, allowing you to connect to the GoPro App, Smart Remote2 and more. The GoPro App transforms your phone or tablet into a live video remote for your camera, offering full control of all functions and settings, easy shot preview and playback, plus sharing via text, email, Facebook and more. The Smart Remote allows you to control multiple GoPro cameras from distances of up to 600’ (180m).

HiLight Tag
HiLight Tag, a new HERO4 feature, enables you to mark key moments while recording so you can quickly locate your best clips later for convenient playback, editing or sharing using the GoPro App or GoPro Studio. Just press the dedicated button on the camera or Smart Remote,2 or use the GoPro App to tag your highlights.

30% longer battery life.
Featuring a 30% increase in battery life, you can go longer and capture more with the HERO4 Black Edition.

Control. View. Share.
The GoPro App makes it easy to control your camera, and lets you do more with your GoPro content than ever before. Get full remote control of all camera functions. See what your camera sees with live preview for easy shot-framing. View photos and play back videos, then share your favorites via email, text, Instagram, Facebook and more.

World’s most immersive video
HERO4 Black features SuperView, a GoPro-exclusive video mode that captures the world’s most immersive wide-angle perspective. It allows you to capture more of yourself and your surroundings in the shot—resulting in captivating, ultra engaging footage of every adventure.

Auto Low Light mode
Let the camera do the thinking for you. Auto Low Light mode intelligently changes frame rates based on lighting conditions for optimal low-light performance, enabling you to move between bright and dark environments without having to adjust your camera settings.

QuikCapture convenience
Be ready to capture the moment at a moment’s notice with new QuikCapture mode. It turns your GoPro into a one-button camera, allowing you to power on and start recording automatically with the press of a single button. Press once to record video, press and hold for two seconds to capture Time Lapse photos. Never worry again about missing an epic shot.

GoPro App + software
Expand your GoPro experience with the free GoPro App and GoPro Studio software. The GoPro App allows you to control your camera remotely using your phone or tablet, view and share your content and watch “best of” videos on the GoPro Channel. Use GoPro Studio to create your own engaging GoPro-style videos to share with the world.
1430018872
5 Stars based on 2 reviews
Write a Review
By Alex
California, MD
Worth the money
April 25, 2015
I bought a GoPro to take when I travel, I used it a couple times while fishing and the quality is unbelievable for such a tiny little camera. I highly recommend the GoPro Hero 4.
By Jake T.
United States
Go Pro 4It!
December 25, 2014
Don't under estimate the power of a small object. Small but huge things can be done with the Go Pro 4! Luv it!
ProsAwesome compactness! The Best in the West!
ConsNo comment!
1 Question & 1 Answer
Ask a Question
Steve
from Hollywood, Florida asked:
July 26, 2015
What reason between be and se gopro?
1 Answers
The BE is the "black edition" while the SE is the "silver edition." They are just different colors.
David
on July 27, 2015