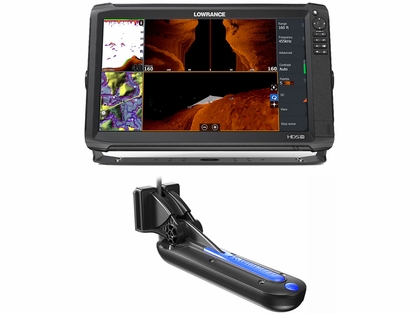 
Free Economy Shipping on Orders over $50 with Code: SWORD50 (Some Exclusions Apply)

With the Lowrance HDS-16 Carbon Multi-Function Display, which combines a huge, ultra-clear SolarMAX HD 16-inch screen with a new dual core high-performance processor, leading-edge fishfinder technology like Live Network Sonar and the latest advances in integrated wireless service tools, you will see better (and more) than ever before! The HDS Carbon 16 boasts speed, agility, and brute power all in one easy-to-use multi-touch display.

The largest display Lowrance have ever produced, the HDS Carbon 16 features a gigantic, 16-inch ultra-clear SolarMAX HD multi-touch display Đ the equivalent of four 7-inch screens. SolarMAX HD screens are viewable through polarized sunglasses thanks to high-bright LED backlighting and advanced anti-reflective coatings which create wider viewing angles in any lighting condition. Only the HDS Carbon provides superior color accuracy and boosted high-resolution viewing panels specifically designed to maximize today's leading sonar. Loaded with a dual core high performance processor, HDS Carbon delivers faster redraw speeds and quicker response times for CHIRP sonar, Live Network Sonar, StructureScan 3D and StructureMap plus split-screen views showing all this and mapping at the same time. Importantly, it reserves enough brute strength to handle future high powered fishfinding upgrades. Lowrance HDS Carbon brings modern "smartphone-like" comfort with integrated Bluetooth and wireless connectivity that supports the most advanced marine technology including a system Service Assistant that allows user to transmit a detailed report of their electronics network direct to technical advisers for custom hands-on assistance, and a Network Analyzer that notifies user when new software becomes available. The most versatile combo out on the water today, the Lowrance HDS-16 Carbon can view and control Mercury VesselView Link, control SmartSteer trolling motor/outboard motors, and be paired with Power-Pole shallow-water anchors. You can easily navigate with the HDS Carbon thanks to a 10 Hz internal GPS antenna, built-in C-MAP, and a multitude of mapping options. Of course, an expansive list of safety and entertainment plug-ins are available to complete your network.

Easy To See: HDS Carbon 16 features a massive 16-inch, LED-backlit, multi-touch, SolarMAX HD widescreen display that is viewable through polarized sunglasses. Set up a four-panel split on the HDS Carbon 16 and view the equivalent of four, 7-inch panels on one screen. SolarMAX HD touchscreen technology produces a wider range of viewing angles and clear visibility in any lighting situation, using a unique balance of high-bright LED backlight, advanced anti-reflective coatings along with superior color accuracy and a boosted high-resolution viewing panel.

Most Advanced Fishfinder Technology: Simultaneously view CHIRP Sonar with StructureScan 3D or StructureScan HD to get the best possible view of fish and structure, below and to the sides of your boat.

Stay Connected: Integrated wireless connectivity with the Lowrance GoFree App and other onboard devices, allows you to download software updates and map purchases 'for immediate use' in addition to viewing and/or controlling the display wirelessly using supported tablets and smartphones.

*Restricted Areas Of Operation for Americas Units
DS Units designed for sale in the America's region have restricted functionality outside of the area defined by 30 degrees West longitude on the East and the International Date Line on the West. America's units operating outside of this region are restricted to English language selection only and will not display metric based units. Inside the America's region, these units have full feature set functionality. Lowrance manufactures WorldWide HDS models that have no feature set restrictions and meet all local and regional requirements for operation. Worldwide HDS models are available from dealers and distributors based outside the America's region only.